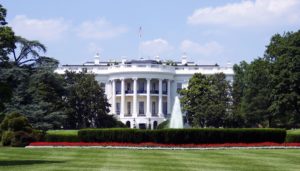 To close out Human Trafficking Awareness month, the White House held a Forum on Combating Human Trafficking in Supply Chains. This event brought together leaders from the private sector, NGOs and the federal government to discuss federal contracts, private supply chains and the commitment to the Administration’s focus on human trafficking issues in supply chains. Recently, President Obama said, “ there is a need to keep striving to protect the rights of our workers to make sure that our supply chains are sourced responsibly.”

Secretary Kerry opened the program with a speech that can be found on the DOS website. The most exciting moment of the day was when he said “For its extraordinary efforts to combat human trafficking by pioneering the Fair Food Program. Empowering agricultural workers, and leveraging market forces and consumer awareness to promote supply chain transparency and eradicate modern slavery on participating farms, we award this Presidential Medal 2015 to the CIW.”

The first panel featured Private Sector companies. I was most impressed with strategies for looking at supply chains as reported by Patagonia and HP. They reported on their social responsibility programs, audits, payment issues and the challenges of enforcement.

The second panel was a Case Study on Effective Partnerships to Combat Human Trafficking and featured the CIW and their team of Fair Food Program partners. Greg Asbed, a founder of CIW gave the most stirring, provocative speech of the day. Because it is something we all need to read, I print it here in its entirety.

“So, imagine for a moment that we had come together not for the White House Forum on Human Trafficking but for the White House Forum on the Fight against Cancer.
We all know someone with cancer. It is a fight that touches all of us, our mothers and fathers, our sons and daughters, our friends and colleagues. Because the stakes are so high, and because the pain is all around us, failure in the fight against cancer is not an option. And because we cannot afford to fail, we do what we do when we take a fight seriously – we invest significant resources in it, we establish strict protocols and standards of evaluation to distinguish effective treatments from those that don’t work, and we implement those cures that do work as widely and with as much discipline as possible. Charlatans exist in the fight against cancer, but only where cures have not yet been found. Where an effective approach has been proven through the scientific method to work better than snake oil, the effective approach is accepted and applied by all reasonable people.

Let’s return now to the fight against forced labor and for fundamental human rights in corporate supply chains. Sadly, failure in this field has not just been an option, but rather, if we are to be honest with ourselves, it has been the norm, and success an all too rare exception. We failed for years to fight modern-day slavery in Florida’s fields, we failed horribly to fight factory fires and building collapses in Bangladesh, and we continue to fail to fight child labor, debt bondage and violence against workers in Mexico’s produce fields, just to name a few glaring examples.

But, as you have just heard, we do, finally, have a proven success story not just to celebrate, but to replicate, and it was designed by workers themselves, the very workers whose wages were stolen for generations, whose bodies were violated by their bosses, who were forced, by violence or the threat of violence, to work against their will. For the workers in Immokalee whose struggle gave birth to the Fair Food Program, the pain – like that of the fight against cancer – was all around them, and failure was never an option, so they constructed a system of education, monitoring, and enforcement so airtight that it was virtually guaranteed to succeed.

And that is perhaps the fundamental lesson that we should all take away from the success of the Fair Food Program: If we are to end modern-day slavery, factory fires, and rape in the fields, then we must start treating the fight for fundamental human rights like we do the fight against cancer — stop accepting failure and start applying real rigor to our social responsibility efforts. That means establishing strict standards of evaluation to distinguish effective practices from those that don’t work, investing in the success of those that do, and implementing those proven approaches as widely and with as much discipline as possible. And to do all that effectively, we must acknowledge that workers themselves have to play a leading role in the protection of their own rights, not as a matter of philosophy, but as a functional necessity.

If we do this, then we will not just fight forced labor, we will eliminate it. We have the proof, and out of the very same laboratory dubbed “ground zero for modern-day slavery” by federal prosecutors just a few years ago. With the Fair Food Program, and in partnership with growers like Jon and corporate leaders like Cheryl, we have eliminated, not just addressed, forced labor, sexual assault, and violence against workers in Florida’s tomato industry. And when lesser but still vexing violations like wage theft or health and safety problems occur, there is a system in place to address them quickly and effectively before they become more serious. We conceived a theory of change, we tested that theory against experiment, and the results are not just encouraging, but frankly astounding. After four years, it is even safe to say that we have a cure to the age-old epidemic of farm labor exploitation.
We have traveled the road from prosecution to prevention, and we can tell you that prevention – a world without victims – is infinitely preferable, for all of us, workers, growers, and buyers alike.

But we should not fool ourselves. If we do this, if we undertake to implement worker-driven social responsibility widely and effectively, it will not be fast, and it will not be free. It will take time and resources. But we have failed, collectively failed, to combat modern-day slavery and other gross human rights violations for generations already, all the while throwing away money in salaries and consulting fees fighting the public relations crises caused by the unrelenting human rights violations. The failure of the traditional CSR approach has many, many externalities, the value of which, when accounted for accurately, would easily fund the implementation of the WSR approach.

So we have time, and we have money, to lead this fight, and if we direct those precious resources toward their place of highest return – toward support of the proven WSR model and the verifiable protection of human rights and not the support of the failed CSR model and the management of public relations crises – then we can, together, wipe the cancer of forced labor from the face of the earth in our lifetimes.
The CIW’s Fair Food Program and Worker-driven Social Responsibility (WSR) model have transformed Florida’s $650 million tomato industry. The program is the gold standard for human rights in the fields today, including: worker-to-worker education on rights, a 24-hour complaint line and an effective complaint investigation and resolution process — all backed by market consequences for employers who refuse to respect their workers’ rights.

It was an exciting morning-my favorite take away line was- Why should we do this? Because it works. Worker-driven social responsibility does work!

This post was authored by founding member and Chair Emeritus of the Freedom Network, Florrie Burke.